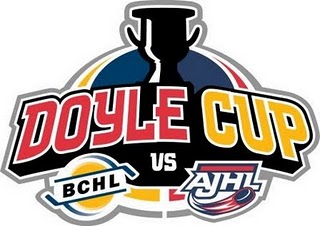 The British Columbia Champions played the winners of Alberta from 1962 till 1984. In 1985 The Doyle Cup was donated by Pete Doyle, a Penticton businessman, and his family for competition of junior amateur hockey clubs between Alberta and British Columbia..

The Doyle Cup series was eliminated in 2013 as a new Western Canada Cup had been announced by the Canadian Junior Hockey League but, was reinstated for the 2018 season.

The British Columbia Hockey League (BCHL) has submitted a notice to withdraw their membership from the CJHL, effective March 24th, 2021, as a result the Doyle Cup has been discontinued.

Prior to beign called the Doyle Cup this was a best-of-seven series between the BC Champion and the Alberta Champion, from 1962 to 1970, for the right to play in the Abbott Cup. The Abbott Cup winner would then represent the West against the East, in the Memorial Cup.

Up until 1970 the winners of the BC/AB series advanced to the Abbott Cup, The Abbott Cup winners went on to play for the Memorial Cup.

In 1990 a realignment of "Regions" eligible to play in the National playdowns took place.

The Doyle Cup Champion would now be the "Pacific Region" representative in the National Junior A Championship.

After the 2017 season the four western leagues (BCHL,AJHL,SJHL,MJHL) decided to eliminate the Western Canada Cup and revert back to the Doyle Cup(BC vs Alta) and Anavet Cup (Sask vs Man) Championships.

This Page No Longer Updated Because...

On Friday, April 9, 2021, the British Columbia Hockey League (BCHL) announced it had withdrawn its membership from the Canadian Junior Hockey League (CJHL) so, is no longer eligible to play for the Centennial Cup, presented by Tim Hortons playdowns..

...Or Until They ReEnter The Fray.