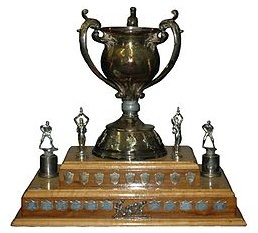 The Abbott Memorial Cup was contested in the early days by teams from British Columbia, Alberta, Saskactchewan, Manitoba (including western Ontario teams playing in the Manitoba league). From 1971 to 1999, it was contested by the B.C./Alta. Champions and Sask./Man. Champions.

In a side note: The Abbott Cup, wasn't seen for two or three years and then reappeared In late April of 1970.
According to the Regina Leader-Post of April 30, 1970:

From 1990 to 1999 the Abbott Cup was contested for during the Round-Robin portion of the National Tournament, between the Pacific Region and West Region Champions. The Abbott Cup was retired and now resides in the Hockey Hall Of Fame

The teams now play a best-of-three game series. Overtime is a full period.

In 1934 'Junior Hockey' in Canada was divided into 'A' and 'B' classifications. The Abbott Memorial Cup (Western Junior Champions) awarded to the Junior 'A' level and the winners still competed for The Memorial Cup .

Note: (CAHL)* - Central Alberta Hockey League was a seniors league as there was no junior league in Alberta at the time.

1967 was an important year for junior hockey in Western Canada as seven teams, including the defending Memorial Cup champion Edmonton Oil Kings, formed the Canadian Major Junior Hockey League as an attempt to establish one junior "A" league in the west.

The establishment of the CMJHL, which was the forerunner of the present Western Hockey League, created several issues including who would be eligible to represent the west in the Memorial Cup finals.

It was determined that the CMJHL teams would not have the right to participate in the playdowns for the national junior hockey championship and as a result, for the first time since 1959 a team other than the Oil Kings would represent the west in the national final.

In 1971, Junior 'A' Hockey was divided once again to form a 'Major Junior' and a 'Tier II' level, commonly reffered to as Junior A.

With a realignment of "Regions", in 1990, the Abbott Cup best-of-seven series was eliminated. The Abbott Cup would now be awarded during a Round-Robin game at the National Championship Tournament between the Doyle Cup champion (BC/Alta Pacific Region) and the Anavet Cup champion (Man/Sask Western Region). .

The Abbott Cup was retired after the 1999 season.

J. Lyman Potts, Joe's eldest son, realized in the mid-1990s, that the Abbott Cup no longer was being given the respect it deserved. He wrote to old friend Tom Melville, a former Regina Leader-Post sports editor, and the two of them mounted a lengthy campaign that resulted in the Abbott Cup being retired to the Hockey Hall of Fame in Toronto.

The Abbott Cup....Lest We Forget about E.L. 'HICK' Abbott 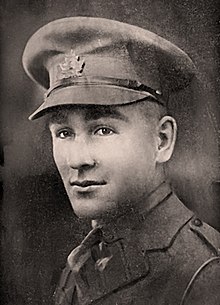 Captain E. L. (Hick) Abbott was a noted hockey player in Western Canada. He captained the Regina Victorias when it won the Junior Championship of Canada in 1913 and 1914.

Capt. Abbott died in active service in the First World War of 1914-18 and the Abbott Cup Memorial Trophy was presented in his memory in 1919 by the Saskatchewan Amateur Hockey Association and is awarded annually for the championship of Junior 'A' Hockey in Western Canada.

note: some info came from www.chl.ca/CHLMemorialCup05/history.html