"SECTION B FANS" AT THE CIVIC ARENA

Image: This is the original image taken for the Morning Star article that was published Feburary 1, 1990. It was cropped for the article with the following as the caption, "Members of "Section B" show how they react to a bad call from the referee. The 25 diehard fans of the Lakers are now wearing their own uniforms for the home games of the Lakers. The club is always interested in new members joining."

MEMBERS OF "SECTION B FANS" IN THE PHOTO

LOCATION OF "SECTION B FANS" 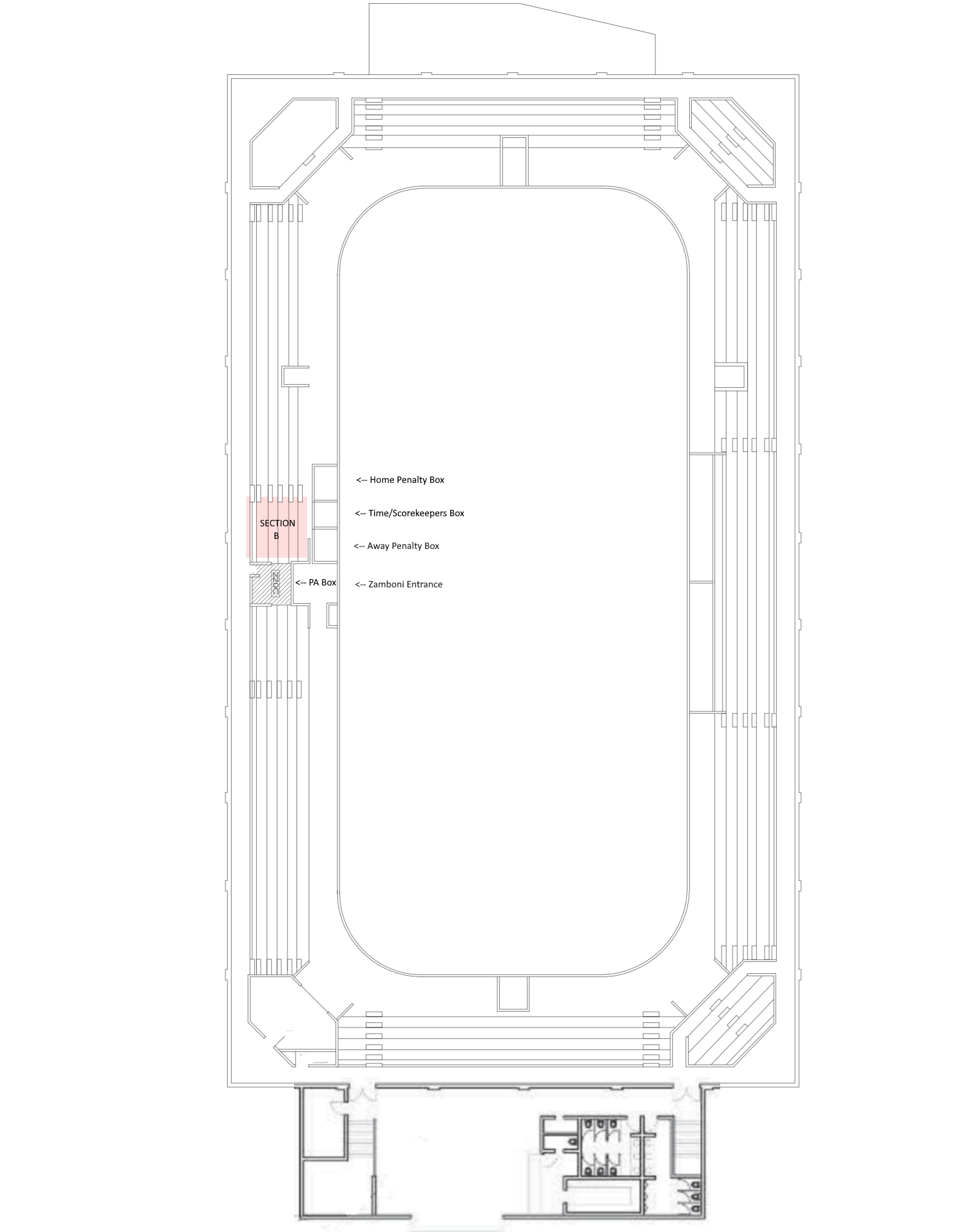 We, the "Section B Fans", occupied Section B of the Vernon Civic Arena, on the left side of the announcers booth and zamboni entrance, right behind the penalty, time/score-keepers boxes.
See: The "red area" of Vernon Civic Arena Seating Plan to the left, the image is clickable.

"The location where these hockey fans sit is important because it allows them to do what they do best. Which is: yell, scream, and generally let the referee know when he's made a bum call. They also take great pride in loudly discussing the genealogy and lack of hygiene of opposing players.", quote from Mike McQuillan.

We tried, as hard as we could, to emphasize the "ADVANTAGE" in the well know hockey phrase, "HOME ICE ADVANTAGE". This was particularly directed to all opposition players, staff and fans alike but, especially to the referees, just ask Dave McLellan and Darren Zupp.

If you've ever been to a Vernon Lakers hockey game you know all about "Section B". If you've never heard of them it's about time you did.

B section is a group of about 25 diehard Laker fans who come out to every game and let every body know they're there. The group adopted the name because they have season tickets in B section, directly behind the two penalty boxes and the timekeepers box.

The location where these hockey fans sit is important because it allows them to do what they do best. Which is: yell, scream, and generally let the referee know when he's made a bum call. They also take great pride in loudly discussing the genealogy and lack of hygiene of opposing players.

"In one game againt the Williams Lake Mustangs, one of the Mustangs stayed in the penalty box an extra 18 seconds to yell at us," brags a female member of B section, "His coach was just furious".

At the last Lakers game against the New Westminster Royals, B section finally jumped into the big leagues. Each Member of the section donned a brand new referee's uniform, courtesy of Kelly's Electronic World from Vernon.

With their new uniforms, B section was in special form, Saturday. "Have another jelly donut ref", shouted a sideline referee. Another senior section member offerd the ref some words of encouragement: "Hey Ref! Your're pretty consistent tonight. Consistently bad".

After a suspect penalty was called against a Laker, the section began chanting from the nursery rhyme, Three Blind Mice.

The B section referees have been offering word of encouragement to players and refs for about three years. During this period the group has formalized itself with the adoption of a "Code of Ethics" which spells out their constitution.

"Only true and devoted Vernon Laker fans shall sit in section B", reads one item. "We will, through the kindness of our hearts, impart our (vast) knowledge to the players and officials... in the most loud and obnoxious manner we can muster without the use of profanity", states the unlawful act.

Many other pearls of wisdom are discribed in the constitution. However, the best way to learn more about section B is at a Lakers game.

Besides being loud and noisy, the group is also cordial and more then willing to give advice on just about anything, "Down in front doorknob. What da'ya think ya are, a window?"

SECTION B CODE OF ETHICS

Only true and devoted Vernon Laker fans shall sit in Section "B". All Season Ticket Holders in Section B shall treat each other with the greatest respect as it is befitting our reputation as the kindest and most knowledgable fans in the arena. Non-season ticket holders will be toleated only if they meet our high standards of etiquette.

Because of our devotion to the game of hockey we have over the years, amassed a vast knowledge of the game and its rules and regulations. We will, through the kindness of our hearts, able to impart this knowledge to the players and officials.

We will give the officials the right to call the game (by themselves) untill they make two mistakes or five minutes, which ever comes first. We will then make all subsequent calls for them, only if the officials can skate and blow their whistles at the same time. (A centain referee with an extremely high forehead will be offered a seeing-eye dog.)

If a Vernon player receives an unjust penalty, we will offer encoragement to the player and tell how to do it the next time, without getting caught by the obviously biased referee.

When an opposing player receives a justified penalty, (ALL PENALTIES TO THE OPPOSITION ARE JUSTIFIED: SOMEHOW), we shall discuss with said player why he received the penalty, his lack of the social graces, lack of intelligence, and lack of personnal hygiene. Also, we will discuss with the player his geneology and the amazing coincidence of how he looks like some of his private parts.

The opposing coach shall be offered our expertise in a loud and concise manner on how to coach his bungling group of morons, which he thinks is a hockey team. Also, as a gesture of our goodwill, we will help the coach pick out the player who should go out to start the bus.

All of the above information shall be transmitted in a manner befitting our stature. In other words, in the most loud and obnoxious manner we can muster without the use of profanity. If profanity must be used, please use a foreign language.

AMMENDMENTS TO CODE OF ETHICS:

Any member of Section "B", in good standing, (extremely good attendance record) may at any time ammend this code.

P.S. FOR A NON-MEMBER - John (our zoo keeper). We could try to be nice to John, if he treats us with the respect we deserve.

P.S.S. BIG AL - Is there a chance we will get some GOOD press this season? 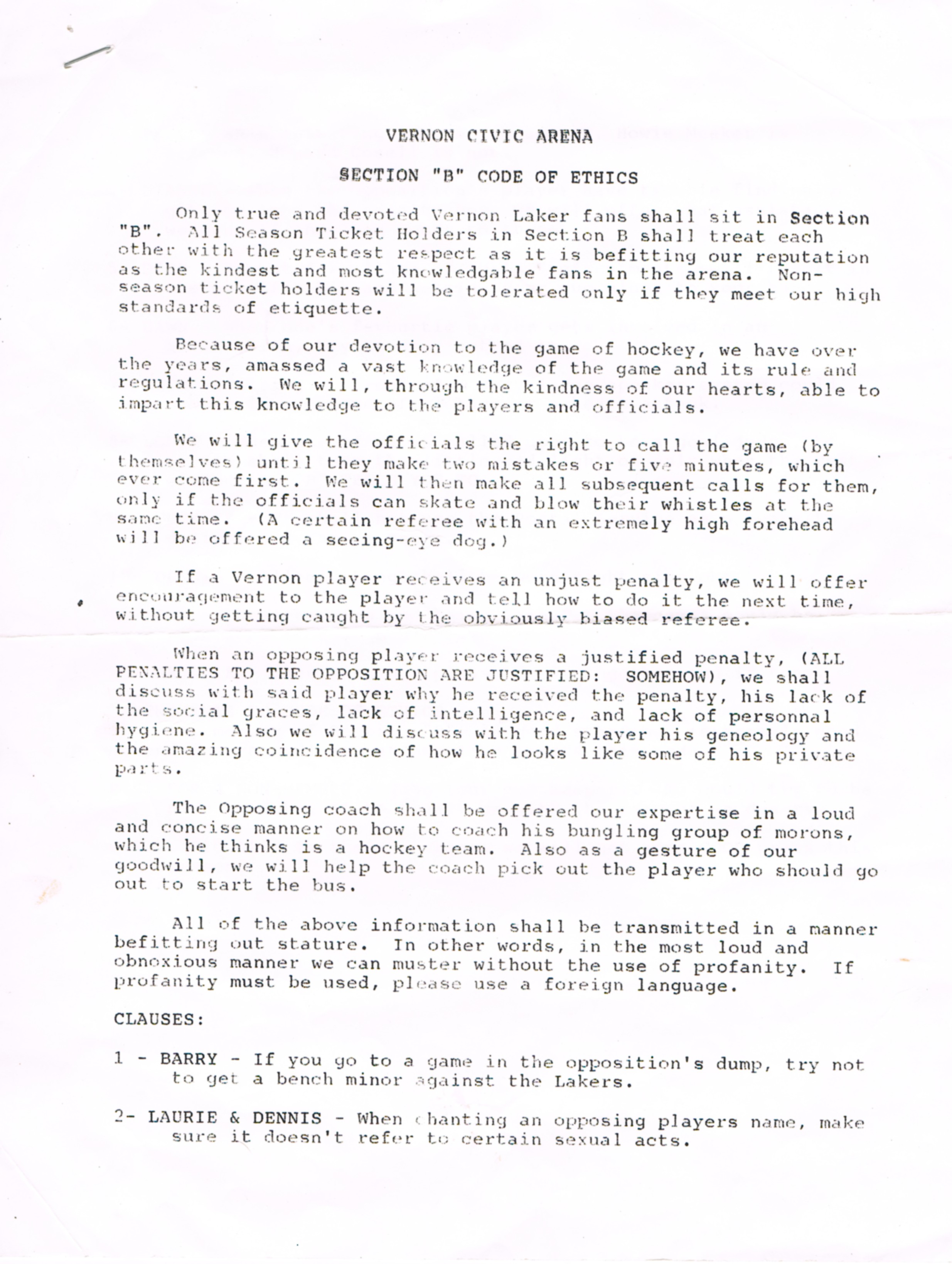 VARIOUS ANECDOTES OF "SECTION B" IN NO PARTICULAR ORDER

* All jerseys were actually Linesmen jerseys however Paul & Diana Beugeling turned theirs into Referee ones by putting the red (with black trim) band around each arm.

* Before the game started, when the refs were at the timekeepers box, "Hey ref, you only have to know one rule, WE MAKE THE CALL, YOU BLOW THE WHISTLE!", courtesy of Paul C. Beugeling.

* One game against Merrit, Barry Gorley was very vocal towards Merritts' bench, during an intermission Merritts' coach Eddie Beers decided to give Barry a visit. Beers promply left the ice and sat beside Barry. Diana Beugeling subsequently asked Eddie for his autograph.

* Our team would score numerous goals on one goalie, we'd chant "SIEVE, SIEVE, SIEVE", while doing a sort of pointing chop motion in his direction.

* One 'Home Opener' featured the HANSON BROTHERS, they lined up on the Blue Line with our team, with the lights out and the spotlight on them Paul B. yelled, "Hanson Brothers, you're nothin but, a bunch of goons!", they leaned out from the line looked sternly and pointed at his direction.

* Referee DARREN ZUPP, 'Even-Up Zupp', was one of our favorite targets, we maintained that our team was already a goal down before the start of a game if, Zupp was the ref.
NOTE: Darren Zupp played for the Lakers during the 1980-81 season.

* Curtis Head was an opposing player that would take numerous penalies, as such we were more than inclined to welcome him back to the penalty box, when he returned to regular play, our chant of "WE WANT HEAD!, WE WANT HEAD!, WE WANT HEAD!" could be heard thru-out the entire arena, and yes we realized that there was another meaning to the term, that's why we continued.

* "Hey, what's that number on your helmet, you're IQ? or your S.A.T. score?" courtesy of Dennis Sponholz.

* One time Barry went to an away game where he sat behind the Lakers players bench. There was, what he thought, was a bad call by the ref so, he vehemently voiced his opinion. The ref thought it came from the Lakers Bench Staff which, resulted in a Bench Minor penalty against the Lakers.

* Referee DAVE 'MAC' MCCLELLAN was another favorite of ours. During the entire 1989-90 season he received alot of our attention. While he was at the timekeepers box, during stoppages of play, he would "beak" right back at us. Even, so far as to pull his jerseys sleeve and mention(para-phrase) that "we have nothing to say because we didn't have a ref's jersey". Hence, why we purchased our ref jerseys.

* A visiting player takes a penalty then proceeds to the penalty box. He tries but, was unable to open the door. So, he attempts to jump over the boards to get in. After his third attempt Diana Beugeling leaves her seat and goes to face him at the box. She proceeds to count, "One...Two...Three...Jump!" while motioning how to jump in.

* At a 'Home Opener' featuring KRAZY GEORGE, We're sure our section made more noise than he did or at least we tried too.

* After some on ice antics of a certain Chilliwack player(John Craighead ? 1992) that landed him in the penalty box which, which just so happens to be right beside where the zamboni is hosed off, he started to chirp back at us. His reward, was a pay-back of a cold water hose-down by an arena staff member.

* "Hey, ref...you must be pregnant, you missed two periods!"... even Mclelland lauged at that and yelled back, "Good one!"; courtesy of Rick Zarr.

* If the Lakers would score into the double digits we would do a count for the goals scored,"ONE, TWO, THREE, FOUR, FIVE, SIX, SEVEN, EIGHT, NINE, TEN" then, cheer loudly while making noise with the cow bells.

* "LOUIE, LOUIE, LOUIE!" would be shouted by us when Louie Salvino, a member, was introduced by the PA announcer, as a 'goal judge', on the south end of the rink.

On the rail above Section 'B'

THE CURRENT VERSION OF THE JERSEY

Almost all the fans that wore the Section 'B' jerseys no longer do. However, one member of that illustrious club, still does. To see him, just go to a Vipers game and have a look around the arena, you can't miss him.