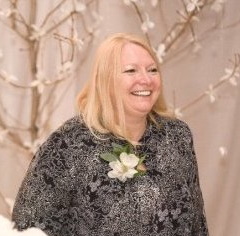 Sad times hit the Gourlie family last month. Jason's step-mom passed away suddenly a few weeks ago. She had knee surgery and a few weeks later had complications. She got a blood clot and was rushed into the hospital but it was too late. The blood clot started in her leg and went up to her brain. It has been very difficult on Jason's dad and Laurie's daughter and family. Both Jason and I didn't know Laurie all that well but she always made us feel comfortable when we came for a visit. She has a wonderful daughter Lorellie and son in law Jim and their children Dallas, Ashley and Tony. It was nice to see them again as well.

Instead of having a funeral Barry decided to have a Celebration of Laurie's Life. It entailed a garden party with friends and family. They had an Elvis impersonator there because Laurie loved Elvis music. It was a nice afternoon and just what Laurie would have wanted. It was great to see Jason's Uncle Brian and Maggie. We also got to spend the day with his cousins Angela and Sher and Chris. It was nice to be there to support Jason's dad and to see family and friends.

SIDE NOTE: Laurie was a long time member of the now infamous SECTION B FANS of the old VERNON CIVIC ARENA. I also remember that she ran Vernons "PoP Shoppe", and after that, a video rental store.