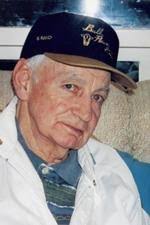 A family man who treated everybody with respect, Vern Dye spent most of his life making an impact on Vernon amateur sports.

Remembered as a father-figure by many Junior A players for a B.C. Junior Hockey League franchise he kept alive for three decades, Dye lost a courageous six- month battle with cancer Saturday afternoon at his East Hill home. He was 82.

"He was a man of very few words," said former Essos' goalie Jack Gilroy, the city deputy fire chief who billeted with the Dye family for one year and later married Vern's daughter Wendy, a former Queen Silver Star. "He made his point by looking at you. He didn't have to say anything. He cared about everybody and that's probably why so many people liked him."

The first lifetime honoured member of the BCJHL in 1989, Dye was the league's 12th president from 1980- 81 and later served as vice-president.

He was part of an 18-member group which signed $300 notes and bought the Vernon Junior Canadians in 1962 from Bill Brown for minor hockey. "Two years later we bought it off minor hockey for $5,000," Vern told The Morning Star in a 1999 interview.

Vern served as General Manager of the franchise for a long run with teams known as the Blades, Essos, Vikings and Canadians. "Vern was a pretty dedicated guy," said Odie Lowe, who coached the Essos to two league titles. "There wasn't much bloody money in our budget and we managed to win a couple of championships so we weren't so bad."

Dye loved to go with local talent and the 1971-72 championship Essos had 11 Vernon products. "They had tight budgets back then so we would ride in station wagons," said George Fargher of that Esso winning team. "Vern was always at the rink and he did a tremendous job for Vernon's franchise."

Goalie Charlie Briskham lived with the Dyes and said Vern taught him to be a better person and athlete. "He was a good man," said Briskham. "He didn't do it for the money because every Junior player who came through a stall owed him money."

Owner of billiards halls downtown for much of his life, Vern played and or managed the Vernon Carlings and later Luckies in the highly popular Okanagan Mainline Baseball League for 20 years.

Dye and his brother-in-law Ernie Kowal combined with city engineer Dave McKay in 1971 to have Lakeview Park built for baseball diamonds.

The son of a Nebraska farmer, Dye was born on Halloween, 1922 in Bashaw, Alta. He was predeceased by his eldest son Wayne, who was drafted by both the NHL Chicago Blackhawks and the Major League Baseball Seattle Pilots.

Funeral services will be held Friday at 1 p.m. at the Trinity United Church.

Born in Bashaw, Alberta on October 31, 1922. Vern Dye relocated to Vernon in 1948, following his parents move here in 1945. Dye immediately got involved in the Vernon sports scene and by the sprig of 1948 was playing 2nd base for Nick's Aces, a local softball team that was formed in 1934 by Vernon businessman, Nick Alexis.

Dye and his brother-in-law, Ernie Kowal, worked with the Vernon city engineer Dave McKay in 1971 to have ball diamonds built at Lakeview Park, Dye was also instrumental in having major upgrades done the the diamond fiacilities as Polson Park.

Baseball wasn't Dye's only passion. He also coached minor hockey. In 1960, Dye was part of an 18-member group that signed $300.00 notes and bought the Vernon Junior Canadiens from owner Bill Brown for Vernon Minor Hockey. In 1961, Vern Dye's Canadians became one of four teams to enter the newly created Okanagan-Mainline Junior "A" Hockey League, which later became the BCHL (British Columbia Hockey League). In the years that followed, Dye served as President and Vice President of the league, and his contributions over three decades as owner, coach and general manager were the foundation of the Vernon franchise.

In 1990, Dye was presented with a plaque and Honourary Membership in the B. C. J. H. L. It was the first honourary membership bestowed by the franchise. A few years later, in 1997, Dye was again honoured by receiving the Brent Gilchrist B.C. Childern's Hospital Lifetime Community Sports Achievement Award. In 2009, Dye was recognized for his many years of service to Junior "A" Hockey in B.C. when the British Columbia Hockey League named their most valuable player trophy after him: The Vern Dye Memorial Trophy

Burnaby, BC, Wednesday, February 11, 2009 - by Nathan Fournier (Nathan also is a writer for Maineiacs Post to Post and the Maine Hockey Journal. He can be reached at fourniern@students.nescom.edu)

British Columbia Hockey League founder Vern Dye will be recognized for his many years of service to Junior A hockey in British Columbia by having the league’s Most Valuable Player trophy named in his honour.

The first recipients of the Vern Dye Memorial Trophy will be unveiled later this month when the league’s Conference MVP awards winners are announced.

Dye was one of Junior A hockey’s greatest advocates until he passed away four years ago. In 1961, his Vernon Junior Canadians became one of four teams to enter the newly created Okanagan-Mainline Junior A Hockey League, which later became the BCHL. In the years that followed, Dye served as a President and Vice President for the league and his contributions over three decades as owner, coach and general manager, and billet were the foundation of the Vernon franchise.

"Everybody who has been involved with the British Columbia Hockey League over our 48-year history owes a debt of gratitude for the time, effort and passion put forth by Vern Dye," BCHL Commissioner John Grisdale says. "To honour Vern’s contributions each year with the presentation of a Memorial trophy to our Most Valuable Players will be a fitting legacy for a dedicated hockey man and a tremendous human being."

Each season, a player from both the Coastal and Interior conferences are selected for the Most Valuable Player award. The Vern Dye Memorial Trophy will be housed at the B.C. Hockey Hall of Fame in Penticton.

Past winners of the trophy are: Here