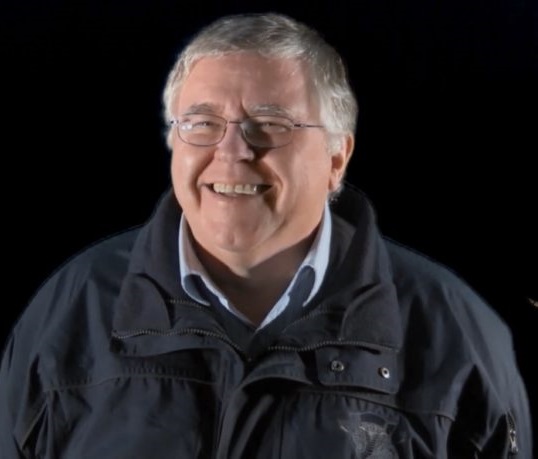 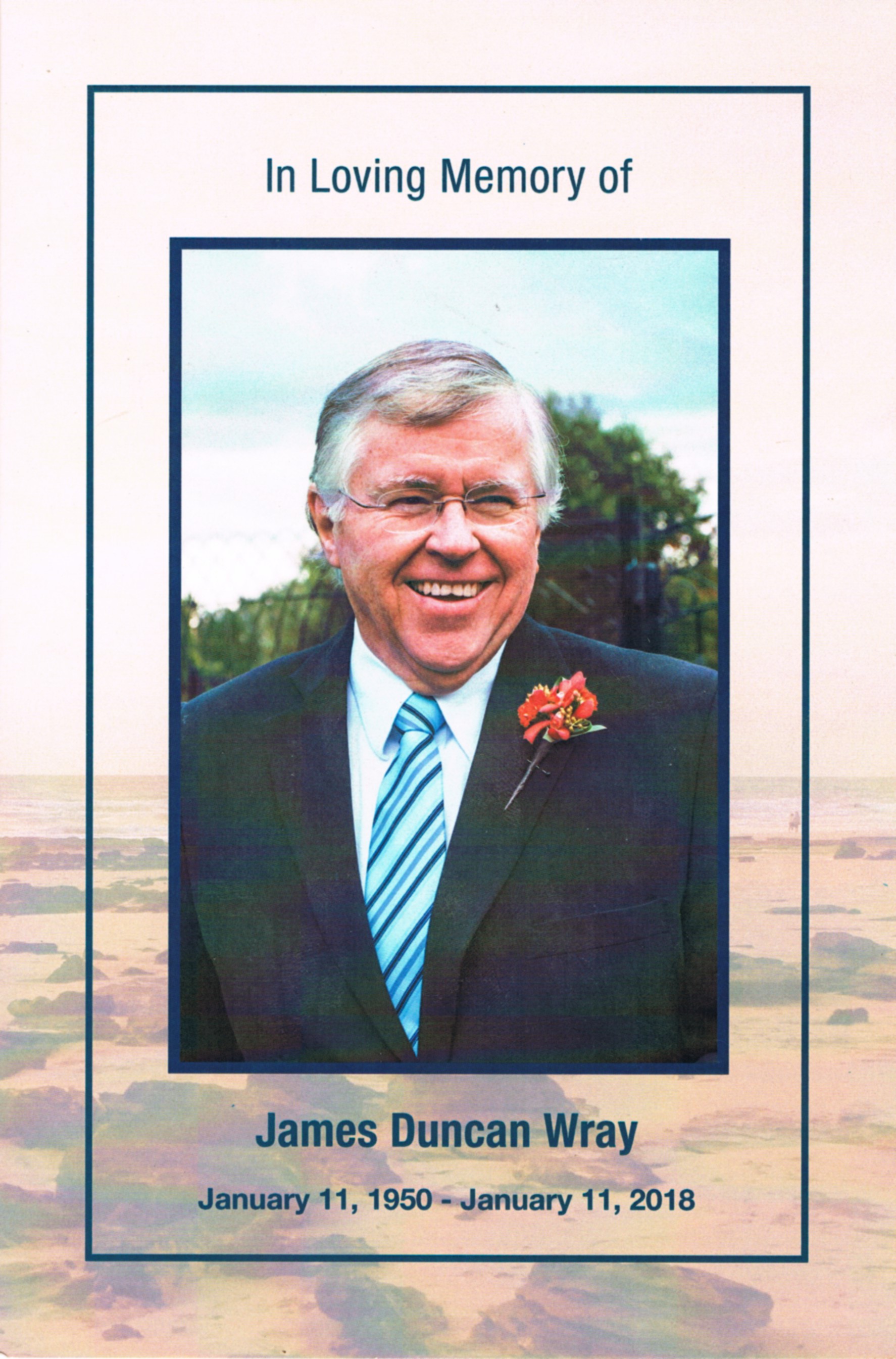 It is with heavy hearts that we announce the sudden and unexpected passing of James Duncan Wray on his 68th birthday in Victoria, British Columbia. Duncan is survived by: Libby, his loving wife of more than 40 years; his brother Fred (Linda); sisters Eleanor and Joanie (Jim). He also leaves behind five adoring children: Jonathan (Anna), Andrew (Eliza), Nicholas (Julie), Erica (Jason) and Alexander (Ashley) as well as his grandson and namesake, James.

Duncan was born in Montreal and lived in many cities while pursuing his education and career. In 1986 he moved to Vernon, British Columbia, where he practiced as an oral and maxillofacial surgeon until 2011. In 1999, Victoria became his second home for a time, and again upon retirement. It was there where he was overjoyed to welcome his grandson and was looking forward to welcoming a second in March.

Duncan's biggest loves were Libby and his children. His family meant everything to him. He was a devoted, loving and giving husband and father who cared tremendously and always supported his kids to pursue their dreams. An avid photographer and traveller, Duncan loved to share the amazing photos he took with his wife by his side, across the world's seven continents.

Duncan's passion was his Vernon Vipers Hockey Club and the British Columbia Hockey League. For over 25 years he took immense joy in the sport of hockey and providing the opportunity for young men to achieve hockey, professional, and personal successes. It was the growth and development of the Vernon players that was the true reward for Duncan.

There will be a celebration of Duncan's life at Kal-Tire Place in Vernon on January 20 from 3pm to 5pm. In lieu of flowers please consider making a donation to the Heart and Stroke Foundation of Canada, the BC Cancer Foundation or another charity of your choice.

Duncan died in his sleep, on his 68th birthday, Thursday, Jan. 11, in Victoria. He bought the Junior A franchise from Vernon businessmen Mel Lis in 1992.

Retired NHLers Brent Gilchrist and Steve Tambellini attended the service which included a touching 15-minute video slideslow on Wray's life. Wray's five adult children were last to take the podium with sons Jonathan, Andrew, Nicholas and Alexander right by Erica's side as she talked about how her father taught her about kindness and love.

Ferner, who apologized for writing his speech on the bus trip home from Prince George early Saturday morning, told stories about Wray being a consummate prankster. Wray once penned a fake press release from the BCHL to Ferner which stated that all coaches had to wear helmets at practice sessions.

'I gathered the players at centre ice and told them that if anybody laughed at my helmet, I'd trade them,' quipped Ferner. 'Duncan got me'.

Ex-Viper captain Chris Crowell, who welcomed a baby boy to his world Thursday morning, made the trip from Kamloops for the church service. His number 18 was also retired by Wray.

Under Duncan's watch, the Vipers claimed four Royal Bank Cup national titles and six Fred Page Cup league championships. He was inducted into the B.C. Hockey Hall of Game in 2011 and his 1999 RBC-winning Vipers team joined the same shrine last year. Wray, a retired oral surgeon, was a key member of the BCHL board of governors. 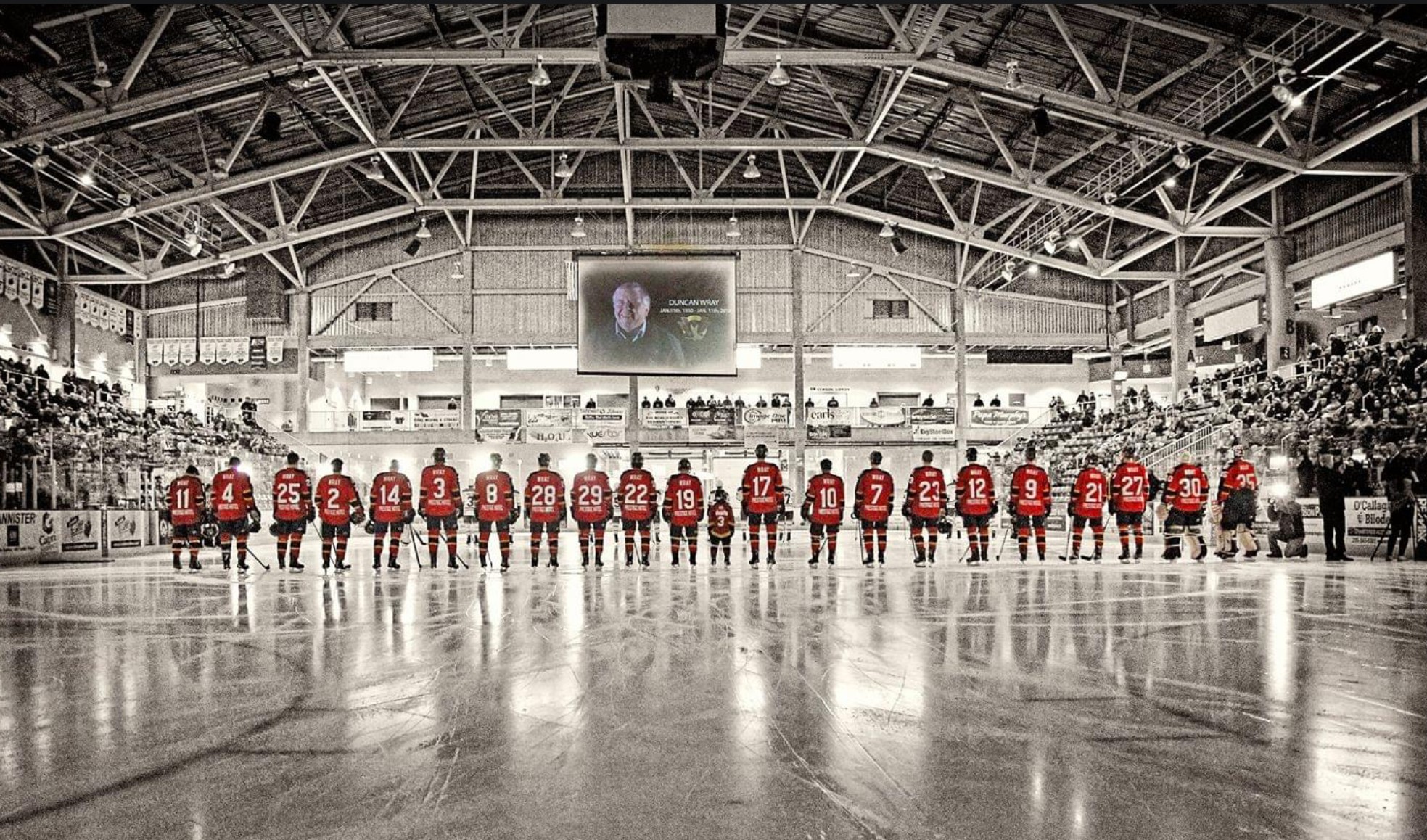 On game nights, Duncan Wray strolled around Kal Tire Place chatting with friends and fans while watching his beloved Vernon Vipers. He got there early and stayed late.

It was his second home so it's only fitting Wray's celebration of life will be held at the facility's concourse Saturday from 3-5 p.m. There will be a more formal service for close family and friends Saturday morning at a local church.

Wray, who owned the B.C. Hockey League franchise for 25 years and was on the board of governors for the Junior A circuit, died in his sleep, on his 68th birthday, last Thursday in Victoria.

Duncan lived in several cities while pursuing his education and career. In 1986, he moved to Vernon, where he practised as an oral and maxillofacial surgeon until 2011. He often performed emergency surgery on his players during the hockey season.

In 1999, Victoria became his second home for a time, and again upon retirement. It was there where he was overjoyed to welcome his grandson and was looking forward to welcoming a second in March.

An avid photographer and traveller, Wray loved to share the amazing photos he took with his wife by his side, across the world's seven continents.

His sixth kid was the Vipers, who be purchased in 1992. He was a father-figure and loved seeing the Vipers advance on college scholarships or other paths in life.

In lieu of flowers, people are asked to make a donation to the Heart and Stroke Foundation of Canada, the BC Cancer Foundation or another charity of their choice.

The Vipers honoured Wray by wearing the Wray name bar on their jerseys during warmup of their game versus the Cowichan Valley Capitals. A video tribute was played after executive vice-president Todd Miller read a touching life capsule of his boss from the Viper bench.

'Duncan Wray was instrumental in shaping the lives of so many individuals who knew him and so many players who were fortunate enough to wear his team colors,' read Miller. 'Under his watch, the Vipers claimed six Fred Page Cup BCHL titles and four RBC Cup national titles. He was inducted into the B.C. Hockey Hall of Fame in 2011 and his 1999 Vipers team was also inducted last year.

'Dr. Wray served the BCHL faithfully for over a quarter century and was the chairman of the league's board of governors right up to the time of his passing this week. Duncan always wanted his teams to succeed and provided any tools necessary to make that happen.

'No one will ever understand the type of commitment he had to his family, staff, the BCHL, and his beloved Vipers.

'He was never about the personal accolades as much as he was about the victories and the championships and no one wanted to win more than him. However, win or lose, it was his players and the community that were most important and close to his heart.

'His legacy will forever be the influence he had in helping young boys turn to young men when their time in Vernon was complete. Duncan's saying was always 'Once a Viper Always a Viper' and it rang true so often when alumni would make their return to Vernon. He was like a proud Papa when ex players would return with their families and talk about how important their time was with the Vipers.'

Wray's adult children attended the game Saturday, won 2-0 by the Vipers. Chris Crowell, a huge favourite of Wray, Dave Robinson and Bryce Kakoske were among former players who showed up. Crowell's number 18 is retired in the arena rafters.

Added Miller in his address: 'Along with his Viper family, Duncan would always speak highly and proudly of the accomplishments of his children Alexander, Nicholas, Andrew, Jonathan and Erica. He was a family man, a proud father and grandfather and would always take the time to update everyone on each one of his kids.

'For those who knew him though, he never referred to the boys by name but more by number. It was always #1 son, #2 son, #3 son or #4 son, The numbers were not a ranking system but were given by age and sometimes probably to remember which one was which. He was so looking forward to escorting Erica down the aisle next month at her wedding.

'Among all the kids Erica could do no wrong. She was the apple of Duncan's eye and would bat her eyes at him and receive anything she pleased. His wife Libby was not a huge hockey fan but somehow she had the patience and understanding to allow Duncan to chase his passion for so many years.'