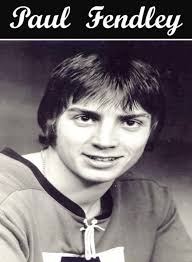 The following two articles appeared in local papers on this subject :

With his team playing short-handed, Fendley was checked by a player from the Red Deer Rustlers after nine minutes of the third period. He was knocked off balance and spun around trying to stay on his skates. He lost his protective helmet as he fell, striking the back of his head with full impact.

Fendley was leading scorer on the Guelph CMC's of the Southern Ontario Hockey Association Junior 'A' League who went on to win the game and the cup.

A Georgetown resident, he played his minor hockey here before playing for the Brantford Majors two years ago in the SOHA Junior 'A' League during the 1970–71 season.

In that year he scored 10 goals and nine assists for 19 points in 20 games. On January 9 he was involved in a trade which moved him to Guelph.

A center, Fendley was Guelph's leading scorer in the 26 game playoff series netting 14 goals and assisting on 18 others for 32 points.

In an 8-4 victory he scored five goals and two assists."He would have had a good future in the game", said Guelph general manager Brent Madill. "He would have been a draft prospect for the National Hockey League".

He never regained consciousness after falling to the ice in the third period of the final game and suffering what doctors at the game said was a fractured skull.

Paul leaves his mother, a sister Bonnie (Mrs Fattore) of Hamilton, and a brother Tom at home.

They wanted to celebrate, but they just couldn't. It wouldn't be right. They had this hollow feeling in their stomachs that just wouldn't go away.

"It was sad, real sad," recalls Joe Holody. "It was areal fluke but as it turned out, it wasn't that much of a fluke."

Midway through the third period of Guelph's 3-0 win over the Red Deer Rustlers - a win that completed a four game sweep of the Canadian Junior 'A' final for Guelph's first Centennial Cup win - Fendley was injured in a freak accident.

With the CMC's playing a man short and Fendley trying to waste as much of that penalty time as possible, he was spun around by a routine check near the penalty box by Red Deer's Doug Lindskog. Fendley was knocked off balance by the check and fell to the ice, although he tried to retain possession of the puck. However, the ill-fated player lost his helmet in the collision and the back of his head smacked the ice surface.

"I was sitting right there by the penalty box," says Holody. "He was checked, flew up in the air and landed on his head."

Fendley was examined immediately by team physician Dr. Don Fraser before being taken unconscious to Guelph General Hospital. Fendley was rushed from there to Kitchener-Waterloo Hospital were he died three days later.

There had been talk prior to Fendley's injury that the CMC's, as Canadian Junior 'A' Champions, would challenge for the right to participate in the Memorial Cup tournament for the national major junior championship. Those plans, though, were abandoned.

"No matter what would've happened, it would've been a sad, sad situation," says Holody. "The players didn't feel like playing and there wouldn't have been much to celebrate if we had won."

"It was dampened," remembers Len Gaudette, who was a member of the CMC's executive and would later become general manager of the club. "It was quite a bit of a shock."

Fendley had been an integral part of the CMC's championship-winning team. He had started the Southern Ontario Junior Hockey League season with Brantford before being obtained by the Royal City squad in a mid-season trade. He netted 20 goals and 24 assists during the regular season, but became the team's scoring leader in the playoffs when he collected 14 goals and 18 assists.

"At the funeral as everybody went by, one of his team-mates slipped the championship puck into the casket so he was buried with it," says Gaudette.

Although Fendley had nothing concrete as far as the NHL was concerned, it was thought that his future was bright. NHL scouts had been impressed with his improvement during his junior career and he had received scholarship offers from a couple of American universities.

"I think he had potential," said Holody. "I think he would have made it in the NHL."

While Fendley is remembered for his hockey exploits, Gaudette remembers him for his personality."He was a very nice person," says Gaudette. "He wasn't the type who was getting upset and swearing all the time. He was the kind that parents would be proud to bring up."

Holody, whose teams would win the Centennial Cup later in the decade after he kept junior 'A' hockey in the Royal City alive,pays tribute to Fendley on any team he sponsors, regardless of the age group.

A portrait of Fendley hangs in the lobby of Memorial Gardens and a scholarship in his memory is awarded annually by the Guelph Platers' Junior 'B' squad. 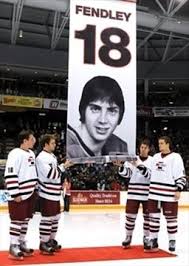 Paul Fendley's number 18 jersey has been unofficially retired by junior hockey teams in Guelph since his death in May of 1972, but it finally became official at a ceremony on Saturday night.

The 19-year-old Norval native died three days after an on-ice collision that fractured his skull during the final minutes of the Guelph CMCs' series-clinching victory over the visiting Red Deer Rebels for the Centennial Cup Tier II Jr. A hockey national championship.

A banner with Fendley's picture and number were raised to the rafters of the Sleeman Centre Saturday prior to the Ontario Hockey League contest between the Guelph Storm and the Kitchener Rangers in an emotional ceremony. The banner was slowly raised to the rafters as the Highland Creek Pipes and Drum band played Amazing Grace.

"You know, people ask me if I'm upset that it took so long," said Paul's brother Tom Fendley, his lone surviving family member, after Saturday's ceremony. "But I'm not upset. The important thing is it was done and he is being remembered."

About a dozen CMC teammates were on hand for the event, along with many fans who were in the packed Memorial Gardens' crowd on that fateful evening.

"Paul was not only a good hockey player, he was a good guy and a good teammate," said Guelph native Doug Riseborough, a member of the CMCs and current general manager of the National Hockey League's Minnesota Wild. "Paul was confident, positive and friendly. The players on that team all remember, with great pride, that win. And with great sadness, that loss."

Ron Fogal, a fellow Georgetown resident and Fendley's best friend at the time of his death, commuted with Fendley to games and practices in Guelph. They played together on Georgetown minor hockey squads from peewee through midget that won a provincial title and were members of the only local team to ever capture the Georgetown international bantam tournament.

Both moved on to the major junior level- Fendley with the Peterborough Petes and Fogal as a defenceman with the London Knights- before ending up being acquired by Guelph for the championship run.

"It was well overdue that something be done in memory of Paul because he was a superstar and a real class guy," Fogal said.

"I cried for years and years after Paul died. He had everything going for him and we had planned to spend that summer together getting ready to hopefully be drafted and play in the pros. Paul was such a gifted skater- even better than (Guelph teammate) John Van Boxmeer, who was drafted in the first round by the Montreal Canadiens.