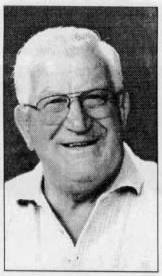 Carl Pedersen Enemark passed away on September 2, 2004 after a brief, courageous battle with cancer.

He was born in Prince George on April 7, 1923, the youngest of five boys. Carl's parents had settled in this area after leaving Denmark and his father had a butcher shop in West Quesnel on what is now named Enemark St. His father died when Carl was seven and his mother struggled and worked hard to keep her family. Carl respected and loved his mother dearly and was supportive and protective of her always.

As a young man, Carl served in the Merchant Marines from 1942-1945 during the Second World War. He married Ivy Sales and worked at Northern Dairies, in the 200 block of Reid St. In 1949, he left the dairy and drove for Carson Truck Lines hauling freight for many years. He later had his own trucks, hauling lumber from Elgert Sawmill off the Barkerville Hwy. Carl began a tire shop business, "Quesnel Tire" in 1960 which he operated for a few years. Having obtained his real estate license, Carl worked for a time for Lon Godfrey and then opened "Enemark & Campbell Realty" with Keith Campbell. Along with partners, Jack Phillips and later Heinz Fiege and Ralph Sanderson, he developed the South Hill Subdivision.

Carl has always been very active in the community. He was a founding member and driver with the Quesnel Auto Racing Club when the race track was in LeBourdais Park. Carl served as an alderman for two terms and was a school trustee for one. He was a member of the Legion and an active member of the Quesnel Masonic Lodge #69.

Carl loved all sports, but his passion was hockey. He played minor and junior hockey in Quesnel and played on the local men's team before and after the war. Carl was an avid hockey supporter of the Quesnel Kangaroos and was their manager for several years in the 60's. He was also a founding member of the present Quesnel Millionaires Hockey Club

After Carl and Ivy retired to Vernon, they bought the Vernon Lakers Jr. Hockey Club in 1982, and he enjoyed watching the young players develop and was especially proud when one of "his boys" earned a scholarship or made it to the next level

Carl was a big man with a huge presence. He earned the respect of others and he had great strength of character. Carl had a tremendous ability to communicate with people from all walks of life, and always had an opinion on all issues of the day. Life around Carl was never dull. Everything he did was full of passion and full speed ahead. He was kind, generous and had a wonderful sense of humor. Above all, his family meant everything to him. Carl's road map of life was his character; his compass was his heart; and his passion was his family.