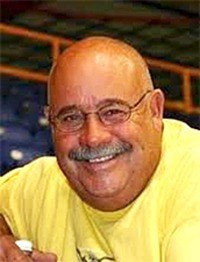 Larry passed away peacefully on December 1st, 2014 in Kelowna General Hospital at the age of 66. He is survived by Gay, his loving wife of 48 years; two daughters, Lonnie (Rob) Revell and Lorrie (Graham) Kowalski; one son, Kevin (Kelly), all of Vernon; five grandchildren: Liam, Logan, Livia, Kaden, and Kael; his mother, Marcelle Black of Vernon; two sisters, Charlene (Norm) DeGirolamo of Richmond, and Lorraine (Barry) James of Vernon; his Auntie Grace (Gordon) Morris of Kelowna; numerous nieces, nephews, cousins, and many dear friends. He was predeceased by his father, Irwin, in 1985.

Larry's passion in life was hockey, he lived and dreamt it. From his early years playing minor hockey to playing for the Trail Jr. Smokeaters and the Revelstoke Selkirks. He then went on to coaching minor hockey in Revelstoke winning several Provincial Championships. After the Minor Hockey years he went on to coach the Revelstoke Merchants Sr. Men's Hockey Team to a Coy Cup Championship in 1990-91. He was the GM of the Revelstoke Grizzlies for 7 years, winning the League Championship in 1997-98. Larry was then hired by the Vernon Vipers as a Scout, eventually becoming the Head Scout. He helped the Vipers achieve 2 National Championships, narrowly missing out on a third Championship. He loved the team and all the players that came and went, creating many lasting friendships. After 11 years with the Vipers, he moved on to the Salmon Arm Silverbacks as Assistant GM and Head Scout to again work with his good friend Troy Mick. The highlight of his hockey days was coaching the Midget Tier 2 Vipers last year. He truly cared for each and every player on this team including his 2 grandsons who were on the team. His son and son-in-law helped coach the team, creating a very special year of hockey memories. Larry's grandchildren were the highlight of his life, watching them play hockey, lacrosse and soccer brought him great pride and joy.

Larry lived life large and will be greatly missed. In lieu of flowers, donations may be made to Kidsport, c/o Recreation Service, 3310 37th Avenue, Vernon, BC, V1T 2Y5.

The Celebration of Life Service for Larry will be held in the chapel of Pleasant Valley Funeral Home on Wednesday, December 10th, 2014 at 2:00 p.m.

Black had keen eye for talent

The Kootenay twins boosted the B.C. Hockey League Vipers to a pair of Royal Bank Cups, joining others like Kyle Bigos and Chris Crowell, who were also prospects signed by Black.

Black died in Kelowna General Hospital Sunday after a nearly year-long battle with cancer. The father of three was 66.

"It's a very sad day," said Viper assistant coach and former captain Kevin Kraus. "He always tried to push me to do my best; he was a big part of my hockey life. He was like a father figure and helped me out last year in Salmon Arm."

As head scout for the Vipers for the last six years (he was a regional scout for five years before that), Black helped source the talent that won the Snakes back-to-back Royal Bank Cup Championships in 2009 and '10, plus a runner-up showing in '11.

Unable to come to a new contract agreement with the Vipers in May, 2013, Black, joined the Salmon Arm Silverbacks as their new assistant GM and director of player personnel.

Black (affectionately known as Blackie to friends and colleagues) was also disappointed a deal couldn't be reached, especially with Vernon hosting the RBC Cup in May 2014. But he understood the business side of junior hockey, and said he was looking forward to rekindling a partnership with Salmon Arm head coach/GM Troy Mick.

The two previously worked together when Mick coached Vernon from 1997-2000.

"It's been a bit of a shock. It's tough getting my head around going to work for another team," said Black.

"But I'm excited to get back working with Troy. We''ve worked together well in the past and I respect his abilities as a general manager. It''s a good opportunity for me."

Black's appointment helped free up Mick to focus more on his duties as head coach. The season before, Mick stepped away from the bench early on to focus more on front office operations and scouting.

Said Mick: "Larry brings a wealth of knowledge to the SilverBacks, on and off the ice. He is a proven winner and has an eye for recruits like no other."

Black, a Revelstoke native, ran the Grizzlies Junior B program there for six years in the 90s. At the time, the team was affiliated with Mike Vandekamp's Merritt Centennials, and when Vandekamp joined the Vipers as head coach in 2001-02, he brought Black on as a regional scout.

Black lived in Vernon with wife Gay (he has three grown children and five grandchildren all living in the area), and has worked with five Vernon head coaches in 11 years - Vandekamp, Mick, Bernie Pimm, Mark Holick, Mark Ferner and Williamson.